All the datasets on LuminoCity3D are presented on a 1km2 hexagon grid, intended to standardise zones across GB and aid comparisons between urban areas.

The data transformations were performed using a technique called a proportional spatial join. The original data (generally at output area and workplace zone level) is assumed to be equally distributed across the original zone. Then through a union operation this data is assigned to zones in the hexagon grid, and split across zones if the original census zone falls across more than one hexagon zone.

This transformation will produce some errors, as the original data may not necessarily be evenly distributed spatially. However these errors will be very minor where the original zones are significantly smaller than the hexagon grid geography. This is the case in urban areas as illustrated below.

The grid approach is more problematic in rural and semi-rural areas, where populations are sparser and the census geography zones are larger. In this case MAUP errors from the data transformation are much more significant. In light of this problem the LuminoCity3D website has a density threshold cut-off at which data values are not shown. The cut-off is 10 residents&jobs per hectare, and this removes villages and rural areas from the visualisation.

As the LuminoCity3D website is designed for displaying urban maps and data, this threshold is judged to be acceptable. This approach does however mean that 15% of the GB population living in villages and rural areas are not shown on the map.

Calculating urban statistics requires defining boundaries for urban areas. Typically these are political boundaries, which in the UK would be local authorities, or their amalgamation into larger geographies such as local enterprise partnerships and primary urban areas. LuminoCity3D takes a different approach where city areas are defined through continuous areas of population and employment density.

This requires setting a density threshold, which for LuminoCity3D is 14 residents&jobs per hectare. While this value is arbitrary to a degree, it does produce a geography that resembles commonly held conceptions of GB city regions (see below) such as Tyne & Wear, Greater Manchester, West Yorkshire and the West Midlands. Lower thresholds tend to result in very large city-regions with Liverpool and Manchester joining into a single city-region, and London stretching even further across the South-East. Higher thresholds result in very tightly defined urban areas that comprise a smaller proportion of the overall GB population.

The LuminoCity3D clusters using the threshold of 14 residents&jobs per hectare cover 40 million people or 65% of the overall GB population. 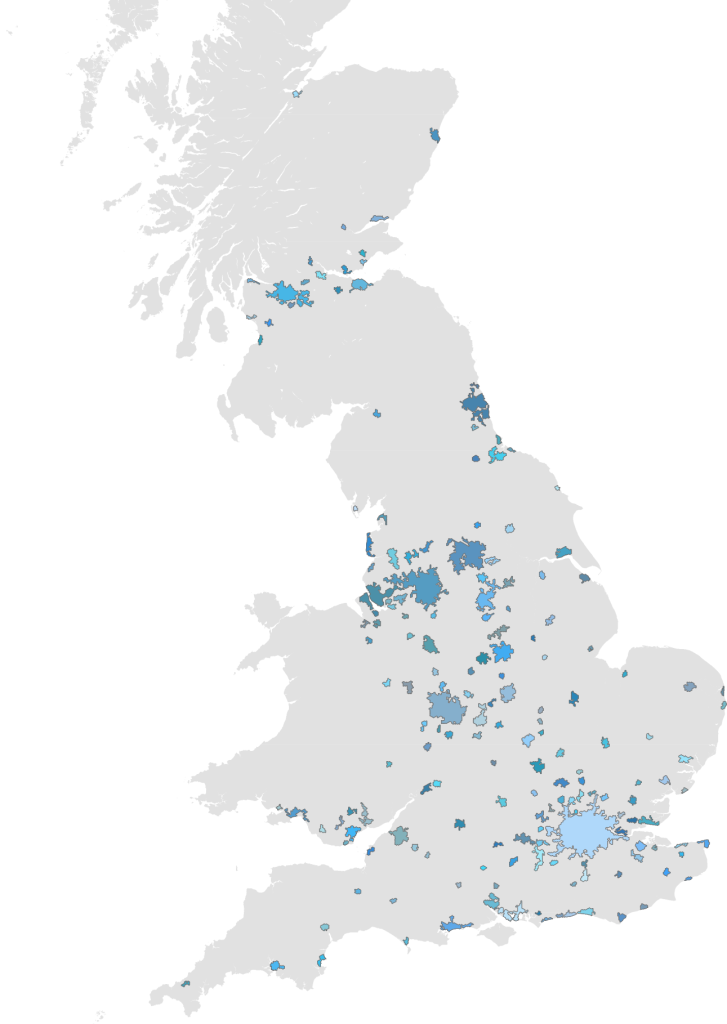